An Attitude of Gratitude

Thank you. It is one of the first phrases we teach our children. At first, it begins as an automatic response. I mean, what parent hasn't repeated this question a hundred times: "What do you say?" I even asked my child this question, hoping for a different response (like good bye because someone was leaving), and got a robotic "thank you" in return.

So, it would seem like most of us in society are pretty accustomed to the phrase, and most of us are probably pretty good at using it. I know, there will always be some people who never want to say it, but I'm not addressing those right now. That's a whole other issue.

But, the attitude that goes along with being truly thankful is an area that we can struggle with. It's easy enough for me to say "thank you" to someone who deserves it, someone who's earned it. But why is it so hard for me to continually cultivate an attitude of gratitude?

The last few devotions in my Jesus Calling have all been about thanksgiving. (Don't go look up today's date. I'm way off!) I've read the suggested verses before, so what the Bible says on being thankful is not new to me. However, there is a concept in Psalms that has had me stewing over my attitude and how thankful I really am acting.


"Make thankfulness your sacrifice to God, and keep the vows you made to the Most High" (Psalm 50:14).

"But giving thanks is a sacrifice that truly honors me. If you keep to my path, I will reveal to you the salvation of God" (Psalm 50:23).

"Let them offer sacrifices of thanksgiving and sing joyfully about his glorious acts" (Psalm 107:22).

"I will offer you a sacrifice of thanksgiving and call on the name of the Lord" (Psalm 116:17).

Did you catch the common word? In all of the verses above, the authors refer to being thankful as a sacrifice. These two words do not seem to go together in my mind. Thankful. Sacrifice. When I think of a sacrifice, I think of the Old Testament version, with the killing of the perfect animal, or I think of Jesus' ultimate sacrifice on the cross for my sins. I do not think of saying a simple "thank you" as a sacrifice.

But now that I'm thinking about it, it is hard to sometimes offer our thankfulness to God. It is hard to live in a constant attitude of thanksgiving.

So, the English nerd in me looked up the word sacrifice. It can be a noun (like the animal being sacrificed) or a verb (the act of). In all of the verses above, the word is used as a noun. Well, the first two definitions listed on dictionary.com all describe the animal part of sacrifice. But the third and fourth ones get interesting


3. the surrender or destruction of something prized or desirable for the sake of something considered as having a higher or more pressing claim.

4. the thing so surrendered or devoted. (www.dictionary.com)

These definitions help me understand why it is so hard to cultivate a thankful attitude. Each definition mentions the word surrender. The third definition really speaks to me. A sacrifice is something we surrender, something we deem as valuable, for the sake of achieving or gaining something better.

But no wonder the Bible says that thanksgiving is a sacrifice that truly honors God. It is a true act of praise! It puts God in the position that He alone deserves. It declares Him as Lord and King of our lives.

Back to that third definition of sacrifice. It says that we surrender something for the sake of gaining something better. So what do we gain when we offer a sacrifice of thanksgiving? I know one thing: joy. God honors this kind of sacrifice by giving us joy. He blesses us for being thankful. Doesn't this really just give us more to be thankful about? Such a great gift.

I find that I also receive peace when I am thankful. When I humble myself and admit that God is better, I am actively trusting Him. When I trust God fully, I experience His peace. I can know that He is in control of any difficult circumstances that I may be facing. And while it still might be hard, He is handling it all on my behalf.

Wow, I've been a little deep today! But this is something that has been bubbling around in my heart and mind for awhile now, and I just had to share it with you all. Plus, it's fun for me to get back to my English teacher roots and do a little word study.

God is so good! We really do have so much to be thankful for. And when we decide to sacrifice our own pride and give Him the praise He deserves, He is so good to shower us with joy and many more blessings. I'm going to be working on this in the days and weeks to come. I am going to trade my grumpiness for joy. I decide to be more thankful. 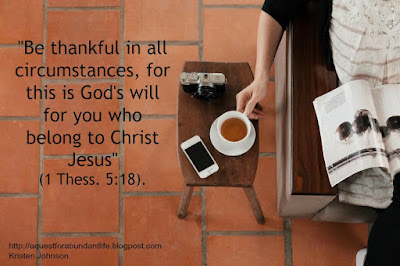 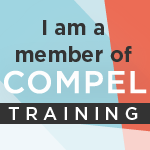